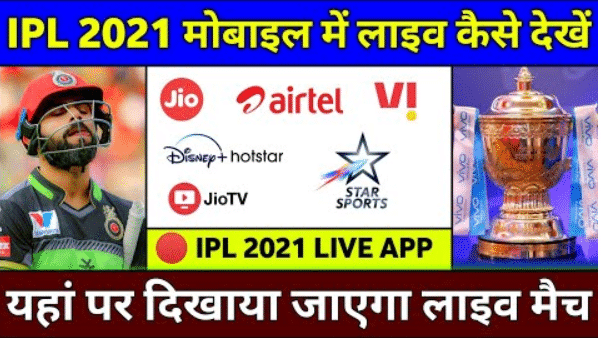 The Indian Premium League (IPL) will begin this Friday, April 9, 2021, which is great news for cricket fans. IPL 2021 will have a total of eight teams. Matches will be held in six different locations around the country during the 14th season of the IPL. If you’re thinking about watching the IPL 2021 livestream on your smartphone or smart TV but are worried about security, we’ll show you how IPL 2021 Can be Seen Live at Home.

With this subscription, you will be able to watch the match livestream while also having access to OTT content, which includes a variety of original shows and movies. Discount: If you have a credit card, you can get a discount on the Disney + Hotstar VIP subscription, making it just 365 rupees.

Network Provider Offers: In the region, network providers such as Jio, Airtel, and Vodafone Idea are giving away Disney + Hotstar VIP annual subscription plans for free with several of their prepaid plans. That is, you can watch IPL 2021 matches for free from the comfort of your own home, even if you have a prepaid plan.

If you want to watch the IPL 2021 on TV, you can do so on Star Sports Network’s sports channels, as it will be televised. This year’s IPL cricket matches will feature eight teams. The afternoon match begins at 3:30 p.m., while the evening match begins at 7:30 p.m.

In India, There are 5 simple ways to watch Indian Premier League live Streaming for free.

4. Vodafone ties up with Disney+ Hotstar to Live Stream IPL for free for its subscribers

Vi has announced a strategic alliance with Disney+ Hotstar to introduce these new recharge packs, which include a one-year VIP membership for free. Since this is a premium package, Vodafone-Idea reported that streaming is limited to HD resolution at 720p and not full HD+. The Disney+ Hotstar VIP membership, according to the operator, provides early access to Unlimited Live Sports, Hotstar Specials, and Star serials. It has also stated that it will provide access to new Indian films, Disney+ films, Hollywood films, and Kids material.